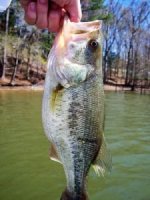 The largemouth bass is an olive-green fish, in the North East right after ice-out, it most often has a gray color, marked by a series of dark, sometimes black, blotches forming a jagged horizontal stripe along each flank. 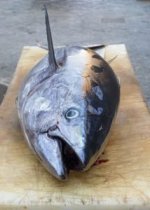 The yellowfin tuna is among the larger tuna species, reaching weights over 180 kg (400 lb), but is significantly smaller than the Atlantic and Pacific bluefin tunas, which can reach over 450 kg (990 lb).

The Bluefin tuna is among the larger tuna species, which can reach over 450 kg (990 lb), and slightly smaller than the bigeye tuna and the southern bluefin tuna.

Lingcod are endemic to the west coast of North America, with the center of abundance off the coast of British Columbia. They are found on the bottom, with most individuals occupying rocky areas at depths of 10 to 100 m (32 to 328 ft). Tagging studies have shown lingcod are a largely nonmigratory species, with colonization and recruitment occurring in localized areas only 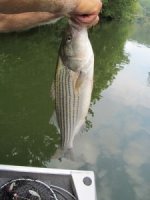 Striped bass are native to the Atlantic coastline of North America from the St. Lawrence River into the Gulf of Mexico to approximately Louisiana. They are anadromous fish that migrate between fresh and salt water. Spawning takes place in fresh water.

Resident freshwater rainbow trout adults average between 1 and 5 lb (0.5 and 2.3 kg) in riverine environments, while lake-dwelling and anadromous forms may reach 20 lb (9 kg). Coloration varies widely between regions and subspecies. Adult freshwater forms are generally blue-green or olive green with heavy black spotting over the length of the body. Adult fish have a broad reddish stripe along the lateral line, from gills to the tail, which is most pronounced in breeding males

Rock cod are yellow-grey to red-brown with white fin margins. They have chin barbels. They may grow up to 50 cm in length. They are found in caves in bays and coastal reefs. They are frequently found inshore and inhabit shallow waters in the continental shelf with typical depth of 10 to 90 m.

Very little is known of the kingfish’s biology, including their habitat preferences throughout juvenile life stages, migration patterns, and wild reproductive behaviour. Adults live around rocky reefs, rocky outcrops and dropoffs in coastal waters, and around pinnacles and offshore islands. Maximum length is often reported to reach up to 180 cm.Crappie

Both species of crappie as adults feed predominantly on smaller species, including the young of their own predators (which include the northern pike, muskellunge, and walleye). They have diverse diets, however, including zooplankton, insects, and crustaceans.By day, crappie tend to be less active and will concentrate around weed beds or submerged objects, such as logs and boulders. They feed during dawn and dusk, by moving into open water or approaching the shore 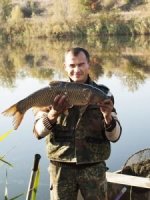 The cypriniformes (family Cyprinidae) are traditionally grouped with the Characiformes, Siluriformes, and Gymnotiformes to create the superorder Ostariophysi, since these groups share some common features. These features include being found predominantly in fresh water and possessing Weberian ossicles, an anatomical structure derived from the first five anterior-most vertebrae, and their corresponding ribs and neural crests.

The bluegill is noted for the black spot that it has on the posterior edge of the gills and base of the dorsal fin. The sides of its head and chin are a dark shade of blue. It usually contains 5–9 vertical bars on the sides of its body, but these stripes are not always distinct. It has a yellowish breast and abdomen, with the breast of the breeding male being a bright orange.