FREE SHIPPING ON ORDERS OVER $50!

Thank you to all the great anglers out there who help contribute to Bakersfield’s only local fishing report. Please don’t forget to send us your best catches of the week to be featured in next week’s report. 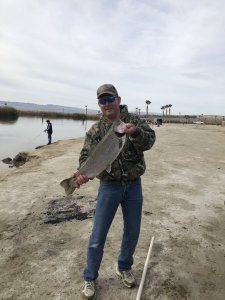 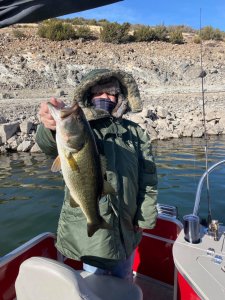 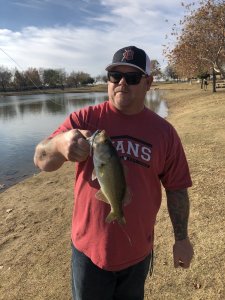 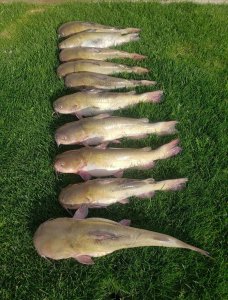 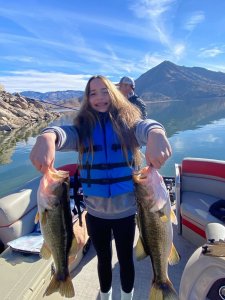 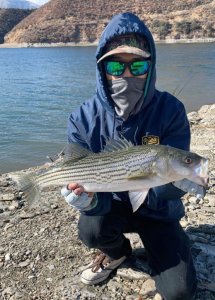 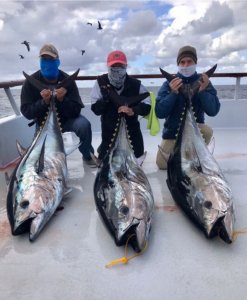 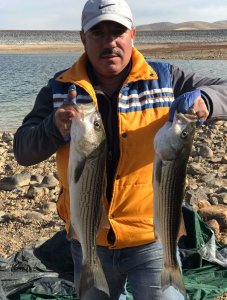 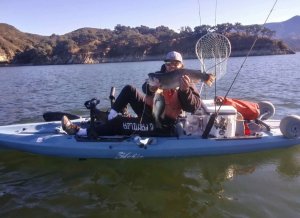 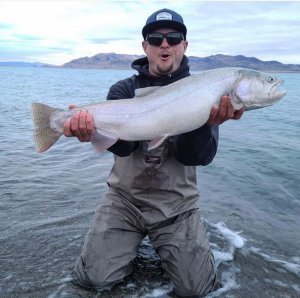 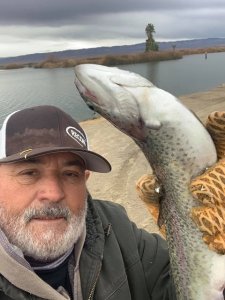 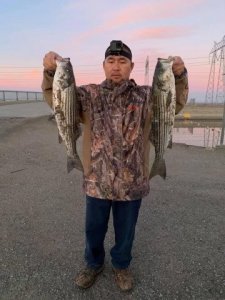 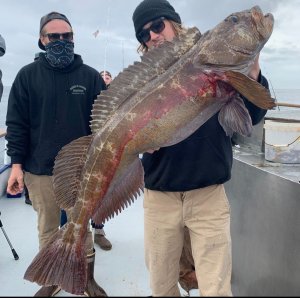 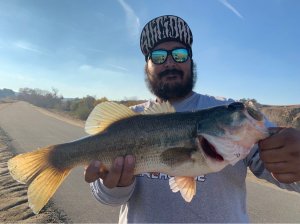 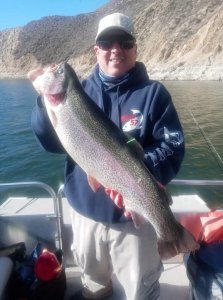 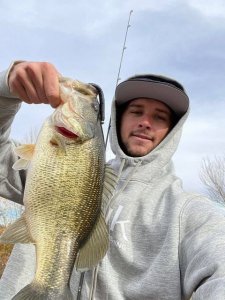 CALIFORNIA AQUEDUCT
Striper and catfish continue to be good options for aqueduct anglers. The striper are biting live jumbo shiners, cut baits, and bloodworms. Lure anglers are fooling linesides with flukes, tube baits and jerkbaits. Anglers reported that they had to move around a bit more last week to locate the feeding striper. There was an unconfirmed report of a 56-pound striper caught from the aqueduct near Coalinga last week. Catfish are biting sardines, anchovies, dip bait, and chicken liver. Largemouth bass anglers are working for bites in the cooler water temperatures, but finesse techniques and a little stealth have paid off. Anglers are reporting bass in eddies and behind bridge pylons using drop shot or Texas rigged plastic worms.

CASTAIC LAKE
Castaic Lake rose to 77 percent of capacity, and water temperatures are in the mid-fifties. The winter transition seems to be over, and bass are finally starting to bite at a better rate. Some crankbait fish have been reported by anglers throwing deep diving or lipless cranks. Bass are also biting drop shot, Carolina rigs, and Ned rigs in 15 to 40 feet of water. Margarita Mutilator, Ox Blood and Hologram Shad have all been good choices. Striped bass have been going for jerkbaits, large topwater lures, and trolled flies. They are also eating the occasional trout imitation swimbait. There’s a trout plant scheduled for the week of January 10th. In the meantime, trout anglers have been doing very well using Powerbait, minijigs, Kastmasters, and spinners.
PYRAMID LAKE
Pyramid Lake remained at 86 percent of capacity, and water temperatures are in the mid-fifties. Trout fishing has been great at Pyramid with anglers filling stringers using Powerbait, Mouse Tails, minijigs, and lures. The best areas have been throughout the marina and along the shorelines within walking distance of the marina. There’s another trout plant scheduled for the week of January 10th. Striped bass have been biting sardines, anchovies, and lugworms in those same areas. Striper are also eating bait at the entrances to main-lake coves in 30 to 60 feet of water. Another option for striper has been to troll umbrella rigs or large Kastmasters across points. Bass anglers reported getting bite using finesse techniques in deeper water. Drop shot, Ned rigs, and small jigs have all been getting bites on main lake points and along bluff walls. Weightless Senkos are also working when allowed to sink along the steep bluff walls. Catfish anglers are getting bite using sardines, anchovies, and dip bait in deeper coves around the lake.
LAKE ISABELLA
The lake is holding at 17 percent of capacity and French Gulch remains the only open boat launch. The bass bite slowed a bit this week for numbers, but quality fish are showing. Many of the fish are coming on slow retrieves with big worms, jigs, swimbaits and crankbaits. Crappie fishing is fair to good and they can be found over structure on mini jigs and small shiners. There was a report earlier this week of an angler scoring a nice bag of fish outside French Gulch with live minnows. Catfish can be caught with dip baits, mackerel and live minnows. Trout have been taken with garlic scented baits, spinners, mousetails and worms. There’s another scheduled trout plant going in the week of January 17th.

KERN RIVER
On Tuesday the Upper Kern River was stocked in Section 4, Powerhouse #3 to Riverside Park in Kernville, and Section 5, Fairview Dam to Lazy River Lodge. Anywhere there is easy access to the river would be a good section to fish. The river is loaded with trout and the fishing has been very good. On Thursday, local angler Scott Dragoun and his son Reese caught over 40 trout in the 20 mile stretch of the Upper Kern on salmon eggs. The water is very clear, and anglers are scoring fish with slow retrieves on salmon eggs, worms and crickets. For the first time this season the Lower Kern River was stocked with trout. This week the Lower Kern was stocked in the flowing sections; Section 1, Democrat Beach to Lower Richbar; Section 2 Sandy Flat to Democrat Beach. Next week there will be another stocking in Section 3, Sandy Flat to Isabella Dam. The flows are very low, and many areas are easily accessible. The Lower Kern bass bite is fair on crankbaits, jigs and spinners. Catfish can be found on dip baits, nightcrawlers and cut baits. At the time of reporting, the Upper Kern River was flowing at 180 CFS and the Lower Kern River was flowing at 222 CFS.

LAKE KAWEAH
The lake level rose to 6 percent of capacity, and fishing has been steady. Some local anglers have figured out the winter pattern, and they are putting together some decent bass fishing outings. Anglers have been fishing from 30 to 60 feet deep using finesse techniques and spoons. Drop shot, Ned rigs, and small jigs are getting bite on main lake points and near rock piles. A very slow presentation has been working for finesse anglers. Dropping down as deep as 60 feet with spoons is scoring better quality bites. It has been a few weeks since the last trout plant, but luckily there’s another scheduled for the week of January 10th. Trout anglers are still getting a few trout using Powerbait, Pinched Crawlers, and lures.

LAKE SUCCESS
The lake rose to 9 percent of capacity, and the bass action picked up this week. There were many bass caught in the 2 to 4-pound range on jigs and shad imitations. Bass anglers are also catching fish using finesse techniques, spoons, and deep diving crankbaits. Finesse anglers are using a dead stick approach in 20 to 40 feet of water on the drop shot to fool bass while spooning has been effective when anglers meter a deep school of bass. Crankbaits are getting quality bites on main lake points. Catfish are biting very well on dip bait, sardines, and nightcrawlers. Trout anglers are still getting a few fish using Powerbait and nightcrawlers, and there’s a trout plant scheduled for the week of January 17th.

BUENA VISTA LAKES
In the last few weeks Buena Vista saw two trout plants, and anglers have been landing personal bests at an amazing rate. Numerous trout over 10 pounds have been reported, and countless trout over five pounds hit the scales. Now we are all anxiously hoping for another trout plant to keep things going. In the meantime, anglers continue to score bites using light line on a Carolina rig. Some anglers reported using leaders as light 2 pounds to fool the huge rainbows. Check your drags! The favorite baits have been Powerbait, Mousetails, and minijigs, and of course garlic scent is very effective. Bass are still responding to drop shot and Ned rigs, but a few larger swimbait fish have been lands as well. Catfish anglers are fooling whisker fish using cut baits and dip bait.
RIVER WALK LAKES
River Walk was stocked with trout a few weeks ago and the bite has slowed. Many of the fish were picked out the first week with anglers scoring limits quickly. There are still some scattered fish being caught on Powerbait, minijigs, Mousetails, worms and spinners. The bass action is fair to good on trout imitation swimbaits, crankbaits and finessed soft plastics. Bluegill are fair on worms.

MING LAKE
The bass action is fair to good on swimbaits, finessed soft plastics and crankbaits. There were reports of larger model bass coming on trout imitation swimbaits this week. Trout action has slowed since the last plant, but they can still be found with minijigs, spinners, garlic scented baits, and worms. Bluegill can be taken on wax worms, meal worms and red worms.
HART PARK LAKE
More bass were reported at Hart Park last week, and anglers are getting most of the action using finesse techniques. Drop shot, Texas rigs and jigs in brown or purple worked well when anglers used a very slow retrieve. Catfish are biting nightcrawlers, dip bait, and cut baits fished on the bottom. Bluegill will eat any live worm.
TRUXTUN LAKE
Recent trout plants at other local lakes drew the attention of most anglers, and that left Truxtun lake wide open for some dedicated regulars. Bass are being reported on Jigs, Ned rigs, and Senkos. There’re also a few bass falling for crankbaits. Catfish anglers are landing whisker fish using dip bait, chicken liver, or sardines.
NACIMIENTO LAKE
Nacimiento remained at 23 percent of capacity and fishing has been fair. Bass anglers are working drop shot and darter head jigs from 20 to 35 feet deep to fool spotted bass. The best bet has been to fish midday after the water temperatures warm up. Spoons are getting some action in deeper water when anglers find a school of fish. Catfish are fair on mackerel, sardines, and dip bait.
TROUT PLANTS
Week of January 3 – Lower Kern River Sections 1 and 2, Upper Kern River Sections 4 and 5, Tule River South Fork - Middle Fork #2
Week of January 10 – Lower Kern River Section 3, Upper Kern River Sections 4, 5 and 6, Kaweah Lake, Castaic Lake, Pyramid Lake
Week of January 17 – Upper Kern River Sections 4, 5 and 6, Lake Isabella, Lake Success
OCEAN FISHING
SAN DIEGO
Fishing for all species of rockfish, whitefish, Sheephead, cabezon, and lingcod is closed from January 1st until March 1st in SoCal US waters. The Bluefin are roughly 160 miles out of San Diego. The New Lo-An returned Monday from a 2.5-day trip and scored 9 Bluefin with 6 of those running in the 100-180lb class. The larger Bluefin were biting flylined and sinker rigged sardines on 60-to-80-pound test. The Pacific Queen returned Sunday from Punta Colonet with 90 Yellowtail (15 to 25 lbs.), 112 Reds, 22 Lingcod, and 110 Rockfish for their 1.5-day trip with 34 anglers.

DANA POINT/SAN PEDRO
Fishing for all species of rockfish, whitefish, Sheephead, cabezon, and lingcod is closed from January 1st until March 1st in SoCal US waters. The Monte Carlo out of 22nd Street Landing returned Saturday from a ½ day with 1 Sandbass, 270 Blacksmith Perch and 1 Sculpin for 28 anglers. The Western Pride out of Davey’s Locker returned Tuesday from a ½ day trip with 12 Sandbass, 4 Sculpin and 15 Blacksmith Perch for 15 anglers.